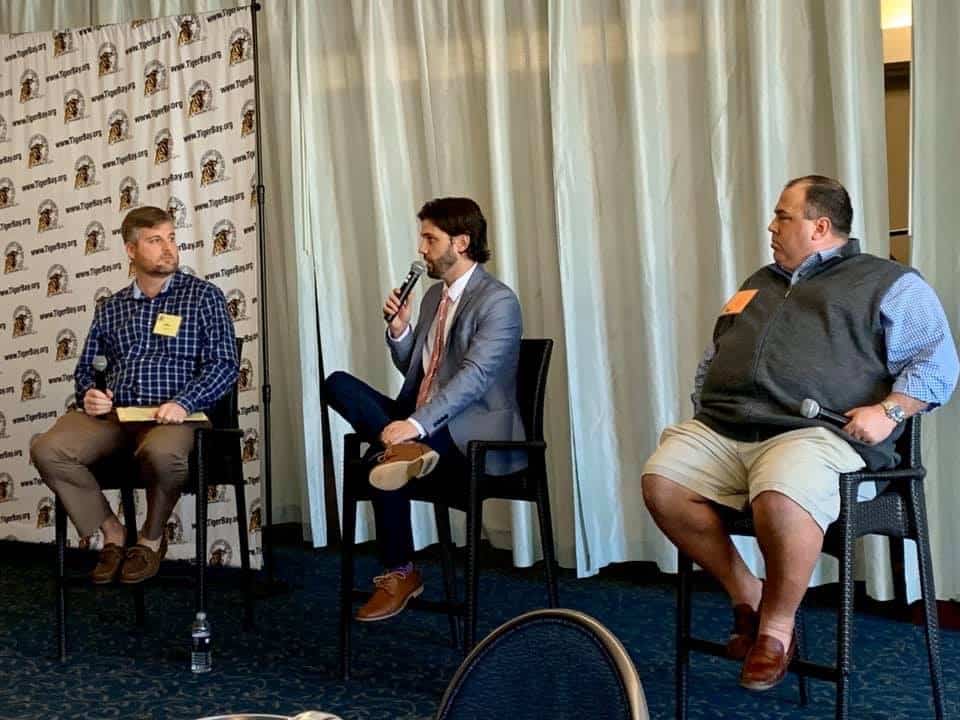 To listen to the full program from the Suncoast Tiger Bay Club’s November meeting, click the arrow above.

Schorsch, who started SaintPetersBlog in 2009 and moved statewide with Florida Politics in 2017, publishes one of the most-read political newsletters in the state, “Sunburn.” Contorno succeeded Adam Smith as Political Editor of the Tampa Bay Times upon Smith’s exit earlier this year. The two politicos shared their takes on what Floridians should expect over the next year.

Contorno and Schorsch began with a discussion of the impeachment inquiry, after a marathon week of testimony from fact witnesses. Contorno pointed to the dual realities portrayed in the media. “It seems that there are two realities going on,” said Contorno. “In one, we’re getting closer and closer to impeaching the president, the other, this whole thing is coming a bigger and bigger hoax by the day.”

According to a Tampa Bay Times poll of 200 Florida Insiders cited by Contorno, 90 percent said the house will move forward with impeachment, but the Senate will vote not to convict the president. Contorno agreed that would be the most likely outcome.

“I look at the impeachment stuff and it makes perfect sense to me because it’s all about the streaming wars,” said Schorsch, in reference to the new television streaming services coming online over the next few months. “You see Disney+, you see HBO Max coming and so how does MSNBC respond? With MSNBC+, so now you’ve got this impeachment stream on television all of the time.”

As for the impending judgment from Congress, Schorsch explained, “We all know how it’s going to end. The possibility of Donald Trump being removed from office depends solely on the courage of Marco Rubio,” he said. “And we know how much courage Marco Rubio has.”

It’s November 2020, which Democrat is president-elect and did they win Florida?

“It seems like the smart money remains on Joe Biden, that money is becoming less and less smart every day,” Contorno explained. “I think his performance last night … showed that he has a lot of weaknesses and that’s going to be a problem. At this point looking at how the states after Iowa, New Hampshire and South Carolina pan out, he would have to finish very poorly in all of those in order to not come away with the nomination.”

Schorsch disagreed. “It’s President Elizabeth Warren,” he said. “Biden finishes 6th in Iowa … and I’m a guy who really likes Biden. It’s not going to be Klobuchar. To my regret it’s not going to be Kamala Harris, although Kamala, if it’s anyone but Warren, could definitely be on the ticket.”

“Elizabeth Warren is running a campaign, and we forget that,” Schorsch explained. “This is a lot of blocking and tackling. She is laying layer upon layer of campaigning and that’s how we traditionally win these things. She’ll finish strong in Iowa, probably second or third. She’ll get to New Hampshire and probably finish first there. South Carolina will be tough for her because of the demographics there. Nevada’s going to be tough, but California has moved up this year.”

If given the choice today, Schorsch said he would put his money on Trump’s reelection. He argues that while Michigan and Pennsylvania will likely flip blue, Florida will stay red, as will Wisconsin. “It’ll come down to weird states,” Schorsch said, staes like Colorado and Arizona that have traditionally not functioned as swing states. “I think, as far as predictions, we’re going to see the blowing up of the Electoral College. I think we’re going to see some weird states flip that we haven’t seen flip before,” he said.

Contorno agreed that there would likely be a shakeup in the Electoral College map, but he does not expect to see major changes until later elections. “I don’t know if we’re going to see a blowing up of the map, but we’re going to certainly start to see the cracks that we’re going to have in 2024 and 2028 for sure,” said Contorno. He believes Georgia, North Carolina and Texas will start to come in play for Democrats, and that as the Baby Boomer generation retires, the north will become both more white and more red.

In Congress, who controls the House?

Both Schorsch and Contorno agreed that Democrats would keep control of the House. “I think it’s going to be similar to 2016, where Democrats will win popular vote,” said Contorno. “That’s going to push them over the top in a lot of these congressional races.” Schorsch argued that Democrats will likely pick up about 10 more seats than they currently have, thanks to retiring Republican House members in swing districts that will be particularly harmful to Republican efforts to reclaim the House.

In Congress: Who controls the Senate?

Both panelists also agreed that the Senate would likely stay in the hands of Republicans. However, Contorno pointed to a few key seats to watch, including Doug Jones’ seat in Alabama, Cory Gardner’s seat in Colorado, Joni Ernst’s seat in Iowa and Susan Collins’ seat in Maine.

What about Florida’s delegation?

According to both Schorsch and Contorno, the 15th Congressional District currently held by Hillsborough’s Ross Spano is the seat to watch, thanks to alleged campaign-finance violations.

Will Charlie Crist keep his seat? If not, who could unseat him?

Schorsch argued that trying to unseat Crist is a “fool’s errand.” But Contorno disagreed. “Crist won with only 54 or 55 percent against a total nobody,” he explained.

To listen to Schorsch and Contorno’s full responses, as well as answers to audience questions, click the arrow above.