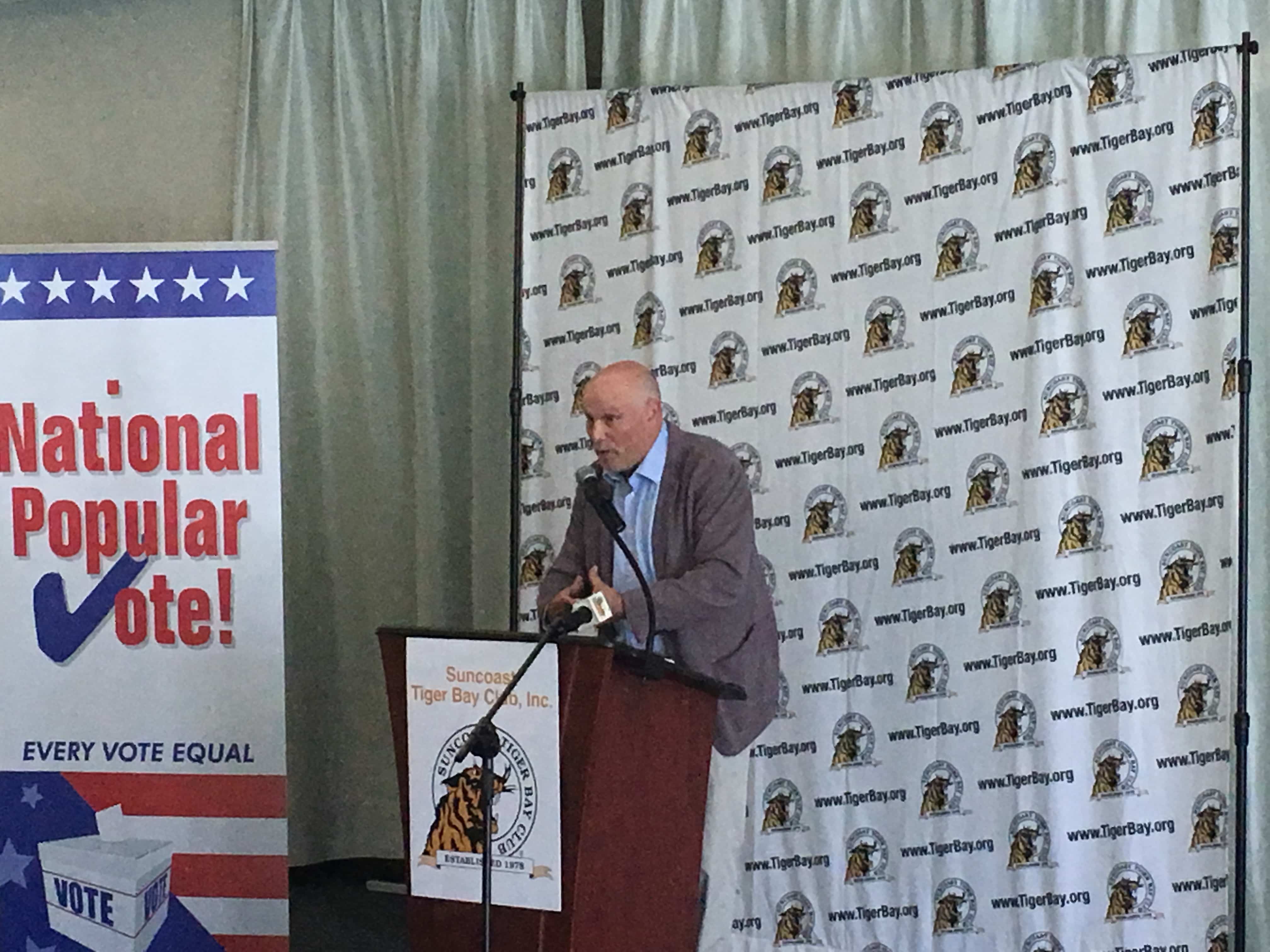 The ramifications of the current state-based “winner-take-all” electoral college system go far beyond any one presidential election, according to Patrick Rosenstiel, senior consultant of the National Popular Vote Interstate Compact.

Trade policy, political engagement, and feelings of efficacy for Americans are all affected by a system that, according to Rosenstiel, many Americans believe cannot be changed.

“I think a lot of people believe that the current ‘winner-take-all system’ was actually in the United States Constitution or was the founder’s system,” Rosenstiel explained to the Suncoast Tiger Bay Club in St. Petersburg Thursday. “Nowhere in the constitution does it talk about the state-based winner take all system … The state based winner take all system was not adopted by a majority of the states until the 11th presidential election. It was adopted in the lead up to the Civil War.”

Rosenstiel spoke to Tiger Bay to explain his involvement in The National Popular Vote Interstate Compact, a state-by-state movement that would award the electoral votes from the states participating in the compact to the winner of the popular vote across all 50 states and the District of Columbia. The compact, a contract between states, would go into effect once a 270 electoral college vote threshold is reached between compacting states.

While there are many misconceptions around the way the current electoral college system was formed, the way Electoral College votes are distributed is defined in the U.S. Constitution by just 17 words. It reads, “Each State shall appoint, in such Manner as the Legislature thereof may direct, a Number of Electors.”

While 48 states and the District of Columbia allocate their votes based on a state-based “winner-take-all” system, which allocates Electoral College votes to the winner of the state’s popular vote, these systems were designed by simple state legislation. Other methods for assigning electoral college votes, like those in Nebraska and Maine, were also enacted by state law. Those two states, which do not adhere to the “winner-take-all” trend, designate their votes by congressional district. The same could be done for the National Popular Vote movement.

The Electoral College often comes to the forefront of the American consciousness following “divergent elections,” like 2000 and 2016, in which the winner of the popular vote loses the Electoral College, and therefore the presidency. But the current system has much more pervasive effects on American democracy than the outcome of presidential elections, Rosenstiel explained.

Rosenstiel, who identifies as a conservative Republican, is an unexpected voice for a movement that has largely been characterized as blue state or democratic party-driven. He believes that the current system is responsible for lower political engagement in generally uncontested or “flyover” states, especially for Republican voters living in solidly blue states, and Democratic voters living in solidly red states.

Based in Minneapolis, Rosenstiel says his Republican presidential vote has been drowned out in the reliably blue state for the majority of his adult life, even the 1984 election, when Minnesota was the only state in the nation to go to Walter Mondale.

If, during the 1984 Reagan-Mondale presidential election, the National Popular Vote Interstate Compact was in effect, Rosenstiel’s vote would have counted towards Reagan’s victory.

“Turnout in battleground states in presidential years is 11 points higher than it is in flyover states.”

Rosenstiel also pointed to the ailing agricultural industry and companies like Harley Davidson as casualties of the “winner-take-all” system. As the result of President Trump’s trade war, targeted countries retaliate by attacking industries in key “battleground” states, like Wisconsin, Michigan, and others that they know could harm his reelection. “They retaliate on your agricultural products, where soybeans are now rotting in the thumb of Michigan because they don’t have access to markets,” Rosenstiel said.

“The truth is the system that we have for electing the President of the United States generates policy in a way that isn’t even always good for the battleground states.”