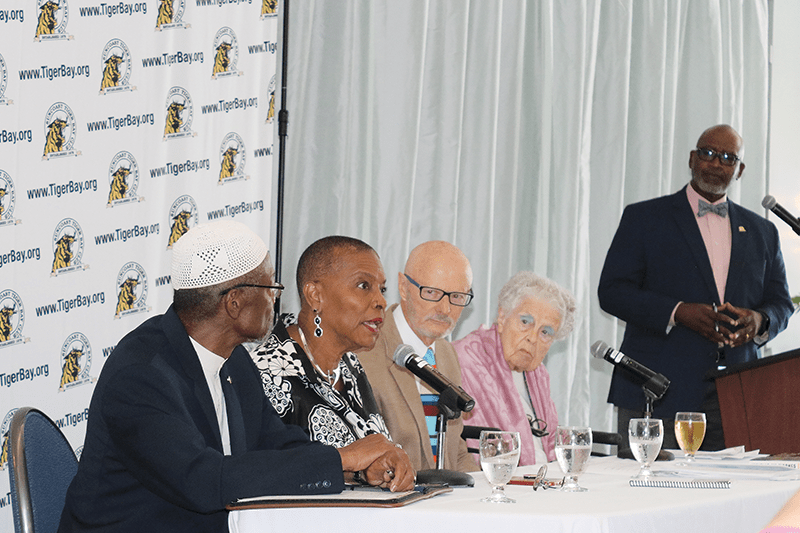 ST. PETERSBURG — Some of the realities of blacks and whites living side by side in St. Pete were discussed at the Suncoast Tiger Bay Club during their lunch meeting entitled “Race & The Legacy of Racism in the ‘Burg” held Thursday, June 27 at the St. Pete Yacht Club.

Tiger Bay is a non-partisan political club that was created in 1978 to foster a better understanding of public issues.

But while the June lunch discussion was the first time in the group’s 41-year history that it focused solely on race in the city, club president Elise Minkoff promised it would not be the last, noting that the lunch crowd’s attendance for that event was the largest so far in 2019.

Pinellas County Commissioner Ken Welch introduced and moderated the event, referring to the enduring impacts of racism that haunt Pinellas.

“Racism is one of defining issues of our nation,” he remarked, noting that it permeates every area of American life.

Imam Aquil began the discussion recalling coming of age in a segregated St. Pete where he interned at St. Petersburg Times when it still had a “news for negroes” section. He spoke of being a student at the University of South Florida where he and other students responded to the assassination of Dr. Martin Luther King, Jr. by leading the movement that resulted in the university’s first black studies program (today’s Africana Studies program).

Reese noted her reason for taking part in the discussion at Tiger Bay, in a location where blacks weren’t allowed until well after desegregation (according to its own history, the St. Petersburg Yacht Club did not admit its first black member until 1985).

“I’m doing it because it’s an opportunity to have a conversation with a group of people who normally don’t have these kinds of conversations,” she asserted.

She also clarified that while she could enrich the conversation as a person of African descent, she was not speaking for St. Pete’s black population.

“I do not speak for my people. We are not monolithic. If you spoke to 100 of us, we would have differing perspectives and opinions,” stated Reese, requesting that listeners not walk away assuming she was speaking for the entire black community.

Dutton’s organization UNITE Pinellas recently released a 2019 Equity profile pointing to serious gaps in everything from black versus white homeownership, education and employment numbers and treatment by both law enforcement and the justice system in the county.

His remarks began with acknowledging that his father’s return from WWII significantly differed from the return of many black vets.

“The G.I. Bill was waiting for him – with opportunity for home ownership, to go to college,” he explained. “My mom and dad bought a house; they started building wealth. That was not made available to the 1.2 million black veterans that came home.”

Foster said that she doesn’t see much change toward “real justice in this country and in our community,” and shared that to get justice, “people have to march.”

She was, however, hopeful that young people especially would be able to move the needle of justice further along by addressing issues of racism with “noisy” action and on-going activism.

While the one-hour discussion could only touch briefly on the myriad of issues involved in on-going racism in the county, it was a particularly St. Pete-ish conundrum that actually inspired Tiger Bay’s decision to hold the discussion in the first place: the green benches.

A symbol of the “whites-only” mentality of St. Pete’s earlier days, the green benches have become a favorite bit of nostalgia for businesses such as Green Bench Brewing Company, the Green Bench Monthly and the bench-making Clearwater business Green Benches & More.

The divide between how blacks and whites regard the ongoing use of “the green bench” as a symbol of St. Pete seems to indicate just how far the community still has to go on issues of race and racism.

And in fact, it was Rev. JC Pritchett’s challenge that won the day’s “Fang & Claw” award for best question — and focused on the troublesome benches.

“Ollie’s Outlet on Ninth Avenue North, Chik-Fil-A on Fourth Street North, the Green Bench magazine  and the ever-expanding Green Bench Brewery are a few of the businesses in this community that continue to use the green bench symbol,” Pritchett noted. “Should we be sympathetic to people who continue to use this symbol that has been hurtful to many of our families,” the pastor questioned.

Reese did speak what was on the minds of many in the room when she answered Pritchett’s questions.

“Sympathetic, no; understanding, no; accepting, no,” said Reese.

“It is very important for us if we are going to be respectful and live in a community that honors and values everyone and all history that we understand the history of the green benches,” stated Reese.

She reminded listeners that the benches were not “romantic” for many, but “humiliating,” while Dutton recommended using the economic approach of holding back dollars from outlets that continued to promote brewery products labeled with “Green Bench” to send a message of protest in solidarity.