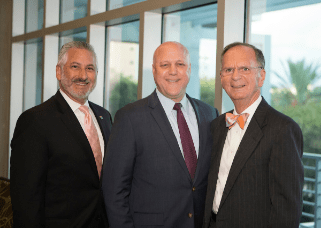 CLEARWATER — Early on during his joint appearance with Tampa Mayor Bob Buckhorn and Clearwater Mayor George Cretekos, St. Petersburg Mayor Rick Kriseman noted the numerous political road shows the three have done over the the years.

On Thursday, before a friendly crowd of Suncoast Tiger Bay members at the Feather Sound Country Club, their performance could have been dubbed “The Three Amigos.”

The mayors, all in their second and final terms, frequently lunch together. They didn’t miss an opportunity to praise one another between bouts of tooting the horns of their respective municipalities.

“The days of fighting over bridges and institutions are over. Buried. Dead,” said Buckhorn, who leaves office on May 1.

Simmering tensions between Tampa and St. Petersburg over Tampa’s plan to convert highly-treated wastewater to drinking water didn’t surface. Nor did anything else that might ruin their party.

For nearly an hour, the mayors joked and poked gentle fun at each other between fielding serious questions about affordable housing, gridlock, climate change and the future of the Tampa Bay Rays.

“Tampa is the best city because we’re so secure in our identity we gave you back your baseball team,” quipped Buckhorn, who said he didn’t have any idea if the region would hold on to its major-league baseball team.

Kriseman said he still believes the 86-acre Tropicana Field site is the best place for the Rays. He said he looked forward to talking with team executives, but was noncommittal on his city’s chances.

“We’ll see what happens,” he said.

Cretekos, who drew a big laugh when he referred to the region as “Clearwater Bay,” reminded the crowd that his city would continue to host the Philadelphia Phillies for spring training.

Hillsborough County’s one-cent transit tax, approved by voters in November but currently tied up in court, was praised by the Pinellas County mayors as something to emulate.

“We’ve got to learn a lot from Hillsborough on how they did it,” said Kriseman, who said he welcomed “elevated aerial transit” and rapid transit bus systems among other options to ease congestion.

“I don’t care what it is, but we’ve got to take those steps forward,” he said.

Buckhorn advised Pinellas residents to create a grassroots effort instead of a top-down push. Cretekos reminded the predominantly Pinellas crowd that two previous efforts across the bay in 2010 and 2016 to provide a dedicated funding source for roads and transit failed.

The mayors also discussed how their cities need to combat climate change. Seawalls, better stormwater and sewage systems and adaptive building codes were all mentioned.

Buckhorn singled out Kriseman for praise, saying his leadership has paved the way for the region to adapt to a changing climate.

Kriseman, who opened his remarks by calling President Donald Trump’s shutdown of the federal government “unconscionable,’ described his administration as a political hybrid.

“We’re proving you can be progressive and pro-growth business friendly,” said the Democratic mayor.

Moderator Adam Smith, a Tampa Bay Times columnist and political editor, jokingly told the crowd before Kriseman’s opening remarks to be prepared for Kriseman to try out his 2022 gubernatorial stump speech.

Kriseman has three more years in his term. Cretekos is slated to serve until his term ends in 2020. But Buckhorn is counting down his final weeks in office.

While Buckhorn joked that he’ll be an Uber driver after he leaves office, Kriseman and Cretekos praised his leadership.

“This is Mayor Bob’s last time with each one of us. I would hope you all appreciate what he has done for the Tampa Bay area, directly and indirectly, because his successor has got some really big shoes to fill,” Cretekos said.