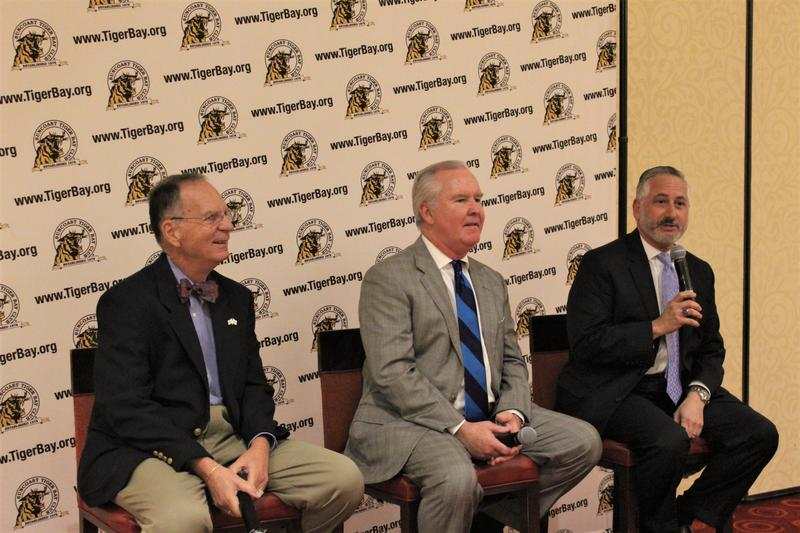 The tensions that have been seen in the past between Tampa, St. Petersburg and Clearwater seem to have largely dissipated.

The bad old days of fighting about water and public institutions are gone. That was the theme as St. Petersburg Mayor Rick Kriseman, Clearwater Mayor George Cretekos and Tampa’s Bob Buckhorn spoke Thursday at the Suncoast Tiger Bay Club.

“The days of us fighting about bridges and institutions. Buried. Dead,” Buckhorn said. “Do not let anybody run for office in Pinellas County that would advocate anything other than a stronger relationship with our partners in the Bay area is a good thing for all of us.”

Buckhorn told the crowd the relationships between the cities has never been stronger.

Kriseman told the crowd that he’s waiting to hear from the Rays on what their next move will be. With the proposal for a new stadium in Ybor City dead, Kriseman says he’s willing to partner with the team to build a new stadium. But if they’re not?

“The city of St. Petersburg will be just fine,” he said. “We have 86 acres that we will be redeveloping. And it gives us a huge opportunity. An opportunity that not a lot of cities around the country don’t have as far as the impact that site could have, and the jobs it could create and the housing it could address.”

The Tropicana Field site is being eyed for everything from commercial and research park to hotels, office space and new homes.