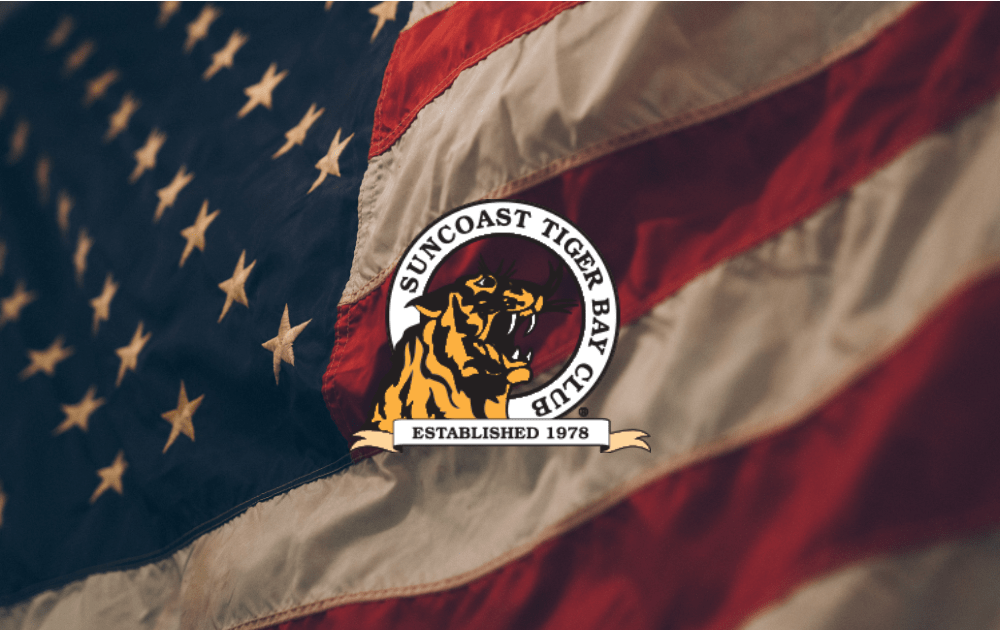 The Suncoast Tiger Bay Club was never going to be just another civic organization programming speakers. Since its inception in 1978, the emphasis of Tiger Bay – a non-partisan political club – has been as much on member questions, and responses, as the presentations. According to charter member and former president Tom Dunn, the idea was to “ask penetrating questions, hold speakers accountable and reinforce public ethical standards.”

(Consequently, Tiger Bay’s “Fang and Claw Award” evolved – presented to that member asking the most penetrating question at each event.)

Others at the organizational meeting included banker Howard Nix, attorney Bill Davenport, former chair of the Chamber of Commerce Tom McLean, and Stewart.  Mike Richardson, of the Evening Independent, soon joined in the effort.  A board of directors was formed, and various administrative matters attended to.

Tiger Bay was publicly announced on Sept. 20, 1978. “We want it to be truly wide-open and broad-based,” McLean said at the breakfast event. “The real value of a Tiger Bay Club is that a meeting becomes such a media event.  We want to generate news. Questions are only allowed from club members, but these people should be able to ask some very pointed questions.”

The first meeting was held Oct. 13 at the Hilton Hotel, with Wayne Mixon, candidate for lieutenant governor, as guest speaker. The St. Petersburg Times noted that Tiger Bay was getting off to a “low-key” start with mostly “mushy, easy questions” from an audience of about 150.  Club organizers downplayed that critique but conceded the need for “a little more in-depth questions.”

Over the years the club struggled with the sharpness of questions, or lack thereof. In 1999, Times columnist Howard Troxler berated the club under the headline “Skip the Catnap, and Get Back on the Prowl.” After stating that he had appeared twice before the club without the tigers “ever laying a claw on me,” he criticized the club for giving city councilwoman Kathleen Ford a free ride. Dunn agreed: “We were pathetic,” he recalled. “There’s a difference between being rude and asking insightful and incisive questions.”

Another program featured Betty Castor, who at the time was running for state education commissioner. It was to be a debate between Castor and her opponent, but the opponent got sick and sent his mother to debate Castor instead. Club rules were that surrogates – including mothers – could not substitute for the invited speaker. Nevertheless the club reserved an empty chair for the missing candidate, and Dunn would briefly address the empty chair when it was time for the missing candidate to present, or rebut.

Over its four decades, Tiger Bay programs ranged from serious to comic, and the best were a mixture of both. In 1984, comedian and perennial presidential candidate Pat Paulsen addressed the club. He stated that while he had announced three times that he would like to be president, he did not think he would ever launch a serious campaign. “I certainly wouldn’t want the job, but I don’t think things would break down if I was elected because I wouldn’t do anything.”

One of the most contentious issues in the city in the 1980s was whether to build a stadium for Major League Baseball. Construction of a multi-purpose sports facility was approved by the city council in July of 1986. At that time there was no commitment from MLB to provide a team to play in the new stadium, and that did not happen until five years after the stadium was built. Governor Bob Graham stated that the council vote demonstrated “a lot of optimism for the future of St. Petersburg.”

During his first Tiger Bay appearance, Graham also got a laugh when he said he was bringing a baseball franchise to Tampa Bay, but there would be three drawbacks: The franchise would be awarded to the Tampa Bay Bucs; Lieutenant Governor John McKay would be the team’s manager; and Graham would be the relief pitcher.

Twelve years later, Graham again addressed the club tongue in cheek about baseball, “taking credit” for the at-the-time winning record of the Tampa Bay Rays by doing a work day at the stadium helping to construct the bullpens “using poor quality dirt in the visitor’s bullpen.”

In 1996, the city was rocked by the shooting of 18-year old TyRon Mark Lewis, which ignited two-nights of racially-charged violence and civil disturbance. Tiger Bay squarely addressed both the shooting and other root causes of the disturbance. Police chief Darrel Stephens told the club: “Somehow, we have to learn greater tolerance so we can at least engage in healthy conversation without all the labels … we can all do better at seeking out opportunities to enhance understanding and sensitivity.”

Stephens was shortly followed in another program featuring Mayor David Fischer. Fischer, speaking about a $20 million federal aid package provided the city to address root causes of poverty, said “There are people who I believe can’t be helped, but at the same time there are a lot of people caught in a web that I believe can be helped. If you want to say nobody can be helped, you’re fooling yourself but winding up with a dangerous community.”

The club also invited Omali Yeshitela, chairman of the National People’s Democratic Uhuru Movement, to reflect on the Lewis shooting and its aftermath. Yeshitela said that the city must commit to economic development for African-American neighborhoods, not handouts but capital, so the neighborhoods could rebuild themselves. He was asked what he would do if he were mayor? “First of all,” he said, “I’d call me.”

Tiger Bay also has an annual meeting, where awards are presented and members kick back and have fun. Over the years such entertainers as Mark Russell and the Capitol Steps have appeared.

Tiger Bay presents two awards and has two programs for young people.  The Ben Franklin Award recognizes exemplary public leadership. Former Tiger Bay President Jade Moore once stated the club named the award for Ben Franklin because Franklin “exemplified public service without enslavement to public opinion.” Recipients of the award are a who’s who of local and state political life: The first recipient in 1981 was school board member Martha Rudy Wallace.  This year’s recipient is State Attorney Bernie McCabe.   The club also presents the Susan B. Anthony Grassroots Award to a person whose grassroots efforts have made a singular contribution to public policy, or by contributing to a broader understanding of public affairs.  The 2015 award went to Dr. Yvonne-Scruggs-Leftwich

The Margo Fischer Young Tiger Program was created to encourage youth to take interest in public affairs. During the school year, high school juniors and seniors, as well as Political Science students from local colleges, are invited to club meetings. Full member privileges, including the right to ask questions, are extended to the “Young Tigers.”

Some have walked away with the Fang & Claw Award. The Dorothy Walker Ruggles Democracy Scholarships are awarded to graduating high school seniors through the Pinellas County Education Foundation.

Suncoast Tiger Bay’s current president, Kelly Kirschner, emphasizes that “one of the many 21stcentury trials we face is to step out of the digital realm, and reaffirm our commitment to building a stronger civic commons by being physically present and interacting with our fellow citizens in organizations such as Tiger Bay.”

Turning 40 is a big birthday in our culture, not just for people, but also organizations. It’s a time for Tiger Bay to celebrate, but also reflect, recharge, and plan for the no less exciting years ahead.