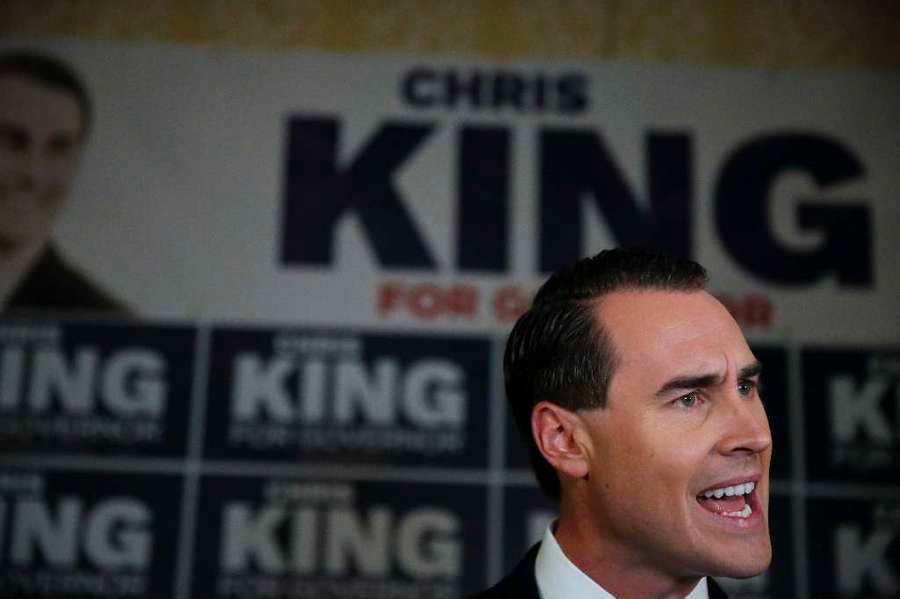 “My party has ceded way too much ground on faith and family values,” King tells at the Suncoast Tiger Bay Club in St. Pete.

Trailing in polls with the primary only 22 day away, Democratic candidate for governor Chris King opened up a new issue in a speech Wednesday – his own religious faith and how Democrats should stand up against what he called the “increasingly dangerous” politics of the religious right.

King said he is “something of a curiosity in the Democratic Party” because of his strong religious faith, which he said stems from a conversion experience at age 15.

Emphasizing that he believes in the separation of church and state, King said Democrats should adopt politics that reflects what he said are true Christian values – concern for the poor and underprivileged, acceptance of racial and gender diversity, and ensuring availability of health coverage, affordable housing and quality public education.

“Faith in its purest and most noble form is about caring,” King, a wealthy Winter Park businessman, told a small crowd at the Suncoast Tiger Bay Club.

“My party has ceded way too much ground on faith and family values. We have allowed a highly weaponized strand of evangelical Republicanism to form that is tearing our nation apart. That was on full display in Tampa last week with Trump’s visit.”

King said he has purposely avoided speaking about his religious commitment so far – “I never wanted to exploit it for political gain.”

His campaign said changing that will be part of his closing argument to voters.

“We’ve got 22 days left in this campaign, and I believe this is a moment in our politics that caused me to speak out on an increasingly dangerous strand of white evangelical conservatism that is plundering the role of faith and politics in our state and our nation,” he said.

“I believe in a gospel of love that fights for the right of children to be united with their families – one that believes that it is a sin that we have 2.5 million Floridians without access to health care,” he said.

According to a recent Mason-Dixon Polling & Research survey, King is last-place in single digits in 5-way primary, but he noted undecided numbers are still high and the winner may have no more than 25 percent.

But King said, “I’m giving it everything I’ve got … I’m a believer in that David and Goliath thing.”

Asked which other candidate he would support if he lost, King wouldn’t say, but in discussing the field of candidates, he had kind words mainly for Tallahassee Mayor Andrew Gillum, “who has become a good friend of mine.”

King told the crowd that he gets strong support from black churches, but, “There aren’t many white churches that are asking me to speak,” and said more white politicians and Democrats should talk about race problems.

Asked about separation of church and state, he said, “I have those same concerns,” and that separation is necessary to protect the religious community.

King said he is pro-choice on abortion, and that outlawing it wouldn’t stop it. But he said government policies of “caring for families,” including health care, affordable housing and education, would cut the number of abortions.

King also reiterated his statements Sunday at a rally at an African-American church in Palmetto protesting the death of Markeis McGlockton and Florida’s Stand Your Ground law. He said that’s part of his motivation to begin talking about faith, calling the rally “the most meaningful day of my campaign so far.”

“If Markeis had been white, if Markeis had been Chris King … and I had come out, maybe lost my temper, pushed him, and he had shot and killed a white man, I believe justice would have looked very different,” he said.

“Y’all are gonna mess around and have a preacher in the governor’s mansion,” Rev. Benjamin Adams Jr. remarked after King spoke.